Outside South Carolina’s first Converge church, Hurricane Florence was thrashing pines and palmettos. But inside, Source Connection was worshiping Jesus for the first time.

Pastor Paul Foster never expected a hurricane during the first-ever service. Neither did he aspire to start a Converge church where there were none.

“I became aware later that our church would be the first Converge church in the entire state of South Carolina,” Foster said. “It put more pressure on me, but I love that. I think it is important (for Converge) to be represented in all the states.”

Just like Foster, today’s leaders are praying and pursuing churches where Converge doesn’t yet have a church. That includes Oklahoma, West Virginia, Nevada, Louisiana and Mississippi.

Today, only five states lack a Converge church because believers have started and strengthened churches together for 150 years. Converge began among Swedish people in Iowa and Minnesota. But they focused on going in all four directions to make disciples from many ethnic identities.

In January 2020, the 10 Converge districts announced they had committed to starting 312 churches before 2026. This unified goal reflects a desire for more people to know Jesus’ love and serve him. Across the movement, district staff consistently pray, deploy resources and apply historically validated wisdom to start churches.

When a healthy church embraces Converge, they become a flagship church, Weber said. This was the case in Philadelphia since there were no Converge churches in southeast Pennsylvania or south New Jersey and only one in Delaware.

In the years to come, Weber and his church started new churches or encouraged other congregations to join Converge.

Other options, Weber said, is Converge resourcing the revitalization of a struggling church or starting an evangelistic mission among people with a goal to become a church.

Finally, God sometimes provides a pioneer who “parachutes” into a state without supportive churches nearby. For example, Michael Henderson started a church using this method in North Carolina.

For the team who went with Henderson, New Beginnings Church became vibrant. Then, New Beginnings steadily generated momentum for new churches in Charlotte. Eventually, God brought Foster to create a church across the border in South Carolina.

Before Foster and his wife started Source Connection in 2018, he pastored an existing church in the state. But the Fosters felt led to start a new church. They planned to be independent and rent a hotel conference room until a friend spoke up.

It turns out his friend was an evaluator at the Converge Church Planting Assessment Center. She introduced the Fosters to her pastor, Michael Henderson.

The basic church planting strategy, Weber said, is to identify a border town with a parent church nearby. Then, the churches function like stepping stones across a stream.

In West Virginia, Weber looks for churches with a similar culture to Converge, especially in Morgantown or Charleston. He also has relationships with churches in Maryland and Virginia, close enough to help with a new West Virginia church.

“The Lord’s going to provide one of these options,” Weber said.

A part of Converge’s prayer and relationship building in the five states is to help people appreciate the movement’s strengths and unique culture.

“People don’t know what our culture is,” Capaldo said. “They haven’t experienced it. So, you’ve got to create a presence somehow that invokes somebody to explore Converge even a little bit further.”

Some independent Baptist churches in Oklahoma may be open to Converge. However, many churches have beliefs that resist partnership by reinforcing division. For example, some churches practice foot-washing and won’t partner with Christians who don’t.

“Trying to find independent churches that are of a Converge ethos or compatible with Converge DNA is a challenge,” he said.

However, Converge was born out of mission among people. Since the 1800s, God’s people in Converge believed making disciples was worth moving to new states and facing cultural discomfort.

“There’s something about building relationships around mission that’s powerful in Converge,” said Converge president Scott Ridout. “The main thing we bring is a gospel message and a pastor who has a passion for the community and seeing the world reached because of that community.”

Right now, Converge is waiting on the Lord to put a passion for these five states into some pastors. This is especially true in Nevada.

“We haven’t had anyone desire to go into Reno or Nevada,” said Converge PacWest regional president Bernard Emerson. “We usually send church planters where they feel called.”

Emerson recognizes churches struggle in such a culture. But churches with a lot of connections are doing well in the PacWest. So, he said the district wants more pastors, especially in a struggling church, to find a coach and supportive relationships.

To achieve this, Lovelace has set up a district cohort model for pastors and church planters. This way, they’ll always be in a relationship with somebody, even if not a sending church located nearby.

“Our heart is still for Nevada,” he said.

Converge Heartland’s churches have the same passion for their region. They want to equip their people to start churches, which, according to several district staff, is more effective than pastors moving to a region.

Heartland farmers often farm on land they own and on rented land. So, district staff adapted that cultural trait ― renting land for farming ― into a church-starting residency.

“It’s a heartland mindset, a heartland strategy,” Capaldo said. “We’d like to start growing residents in other fields. If we want to see Oklahoma reached, the most potent people to do it are going to be Oklahomans.”

Increasing biblical diversity helps start new churches
Another angle and opportunity for starting new churches involves reaching communities of different races and languages. To reach everyone in the increasingly diverse communities of the United States, Converge has built momentum by churches working together.

“Every man, woman and child matters to God, so they should matter to us,” Ridout said.

Within Converge, God has gifted certain people to reach across ethnic, cultural, age and class divides. Therefore, the movement shifted from Swedish Baptists to English-speaking Christ-followers around America and even the world.

The movement also has momentum for starting churches because they have pastors reaching younger generations. Moreover, Ridout said Converge churches are theologically conservative and socially active, a combination that makes a cultural impact.

Rohrmayer said Converge has been reaching out to more and more immigrants in America and people who speak other languages. For example, this summer, a Converge pastor started a Farsi-speaking church in Washington, near near a community with about 15,000 people from Iran.

“Converge is an eclectic group of churches that appeals across generations and micro-cultures and macro-cultures,” Ridout said.

How can each district best organize and allocate resources?
Capaldo organized Converge Heartland more like a home missions agency by applying lessons he learned in overseas missions.

“We’d like to make our residencies available to churches in Oklahoma.”

Ridout said at least 27 churches across the country are hosting residencies for pastors to start churches, usually in their state or region.

Converge Heartland is similar to Converge MidAmerica, which covers many states and more than a thousand miles. So, Capaldo sees value in deploying staff around the district.

Transportation around the heartland is always a factor: Traveling from Sioux Falls, South Dakota, to Wichita, Kansas, for example, takes eight hours driving or flying.

“We’ve got to have more staff distributed if we want to get action in our movement,” he said.

“There has been great progress”
The distribution of staff has been effective in Converge MidAmerica to facilitate more partnerships in more places. For example, Danny Parmalee moved from Milwaukee to Nashville, Tennessee, four years ago. He is the district’s vice president of Church Planting.

“That was strategic,” Rohrmayer sad. “We needed to take it seriously if we’re going to go into these states. We now have several churches in Arkansas, Kentucky and Tennessee that we didn’t have four years ago.”

Rohrmayer said Memphis is a natural place to be praying and looking for connections for Mississippi. The large Tennessee city is just across the border from it. In addition, several Memphis churches have campuses in Mississippi or influence in that state.

A team of people is needed to in Louisiana. Converge staff has made trips to Baton Rouge and New Orleans to deepen connections.

Rohrmayer has been optimistic since being Converge’s national church planting director about 15 years ago. Then, there were more states without a Converge presence. But God raised up pastors and churches for many of them.

“It has not yet become an unacceptable reality”
Many Converge Heartland churches are passionate about starting new churches. Capaldo said a church of 60 people raised $2,000 through a special offering for new churches. Church planting funds in the district are up to a couple of hundred thousand dollars from zero. Yes, zero.

That generosity is reflected across all Converge districts. Converge’s Launch Offering distributed $569,000 last year to the districts for new churches. The offering’s goal is to provide better resources to new churches when they start.

Capaldo is motivated to help more and more people in the movement realize the need for supporting new churches. He knows people are generous following natural disasters, and with good reason.

“How do we tap into generosity when it comes to planting a church?” he asked. “Very few people in our district will wake up thinking we don’t have a church in Oklahoma. It has not yet become an unacceptable reality.”

A focus on prayer remains as essential as organizational resources and strategic decisions. Rohrmayer said there were many prayer journeys in St. Louis, Indianapolis, Louisville, Nashville and Little Rock before any churches started.

“We’re advancing on our knees,” he said. “When I drive from Chicago to Florida, I’m stopping in cities all the time. Why don’t we have a church here?” he asks.

Many Christians believe we don’t need more churches
It’s not uncommon for Christians to wonder if we need more new churches. But analysis of Americans’ lives shows fewer and fewer people know and follow Jesus. Many Converge district leaders emphasized that America is vastly underchurched despite narratives about the country or particular regions.

“Church attendance is on the decline everywhere,” Ridout said.

That’s the primary reason district staff and new pastors keep starting churches. New churches provide fresh energy and opportunities for more people to know Jesus, even if there are many good churches.

When Ridout was a pastor in Arizona, 88% of the people didn’t go to church. But there was a church in every available school and movie theater, plus those with their own building.

“We were still hoping more church plants were coming,” he said of that time. “We could fill our churches 10 times over and still not reach everyone. There’s always going to be more people who need the gospel.”

Are you interested in becoming a Converge MidAmerica|Southeast|Caribbean church planter? Start the journey today. 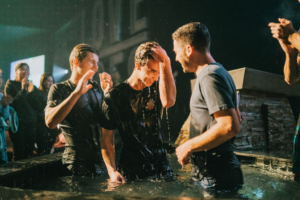 “…being confident of this, that he who began a good work in you will carry it on to completion until the day of Christ Jesus.”  Philippians 1:6 This summer, God moved in incredible ways through

The Beauty of Humility: Heartland Church

At Heartland Church, prayer is the vital foundation of their church and ministry. The congregation comes together for 21 Days of Prayer every January and August at the start of the new year and the