David and Goliath: Are we teaching the wrong lesson?7 minute read

A few years ago when I was in Israel, we drove to the Valley of Elah where David battled with Goliath. People wanted to get off the tour bus and collect pebbles to commemorate the battle. A Moody pastor turned to me and whispered: “Those pebbles aren’t really from here. So many tourists take pebbles that the Israeli Board of Tourism sends a truck down to the coast at night to haul in more pebbles.” So Christians were leaving with a pocketful of pebble fueled inspiration based on a wrong belief.

I wonder if we do the same thing with the story of David and Goliath – we collect inspirational pebbles based on wrong beliefs.

We have all read the story, heard children’s Sunday School lessons, watched videos, and preached sermons on it, right? But are we teaching the correct lesson?

Often the lesson sounds something like: “You may be small and weak like David, but if you use whatever insignificant pebbles you have, and trust God, you can defeat the giants in your life. God can do a miracle.”

Have you preached that? I have. Sounds great. It’s very motivational. “With God’s help I can defeat the giant problems in my life – financial, marital, parental, occupational, you name it. With God on my side and a little bit of faith I can’t lose!” That will sell books!

But is the lesson of David and Goliath really about fighting my giant enemies or is it about fighting God’s enemies? What if the lesson is about spiritual warfare for the kingdom of God, not about achieving my best by beating my personal giants?

What if the pebbles and slingshot are not to teach us to trust whatever limited resources we have, but to teach us to be so intentional about developing our spiritual skills, strength and courageous faith, that when spiritual attack hits, we can stand and fight for the Lord?

What if David’s lack of armor is not to teach us we don’t need armor (“God is our armor”) but to teach us to use spiritual tactics – to stay us outside of Satan’s reach while we fight him and to stay on
the offensive?

Why do I raise those questions? Well, let’s look at them one at a time and see what the text says.

First, David was not fighting his giant personal enemies, he was fighting God’s enemy. Goliath was not standing in the way of David reaching his full potential and living an abundant life. He was challenging the God of Israel.
David: “Who is this uncircumcised Philistine that he should defy the armies of the living God?”
(1 Samuel 17:26)

David wasn’t fighting his giant enemies. He was fighting God’s enemies. David wasn’t even supposed to be in the battle. He was just delivering supplies. Goliath was challenging God’s honor so David stepped forward to fight for God’s honor.
“You come against me with sword and spear and javelin, but I come against you in the name of the Lord Almighty, the God of the armies of Israel, whom you have defied. This day the Lord will deliver you into my hands…and the whole world will know that there is a God in Israel. All those gathered here will know that it is not by sword or spear that the Lord saves; for the battle is the Lord’s, and he will give all of you into our hands.” (46-47)

Second, David probably was not bringing his personal weakness, limited resources (5 pebbles), and inferior weapon (slingshot) against Goliath’s strength, weapons and armor, trusting God to show up with a miracle.

What makes us think David was weak or small? He told Saul:
“When a lion or a bear came and carried off a sheep from the flock, I went after it, struck it and rescued the sheep from its mouth. When it turned on me, I seized it by its hair, struck it and killed it. Your servant has killed both the lion and the bear;” (34-36)

Chasing a bear or lion and killing it with his bare hands? Seriously? Picture how you do that without any weapons. Does that really sound weak or small to you? You need big hands and very strong arms and legs to do that. David was a very powerful man, even if he was the youngest brother.

And what about the slingshot and pebbles? Were they a weak or inferior weapon? Maybe not. Malcolm Gladwell in “David and Goliath: Underdogs and the Art of Battling Giants” (Little Brown and Company) provides a different perspective. He points out that armies at that time had 3 kinds of warriors – the cavalry on horseback, the infantry with swords and spears, and what we would call artillery: archers, and a group called slingers. “Slingers had a leather pouch attached on two sides by a long strand of rope. They would put a rock or lead ball into the pouch, swing it around in increasingly wide and faster circles, and then release one end of the rope, hurling the rock forward.”

These professional soldiers sound a lot like David don’t they? How effective was this weapon in the hands of a man who had practiced diligently, as David had? It was devastating.

“Paintings from medieval times show slingers hitting birds in midflight. Irish slingers were able to hit a coin from as far away as they could see it, and in the Old Testament Book of Judges, slingers are described as being accurate within a ‘hair’s breath.’ An experienced slinger could kill or seriously injure a target at a distance of up to two hundred yards. The Romans even had a special set of tongs made just to remove stones that had been embedded into some poor soldiers body by a sling…  Eiten Hirsch, a ballistics expert with the Israeli Defense Forces, recently did a series of calculations showing that a typical-size stone hurled by an expert slinger at a distance of thirty-five meters would have hit Goliath’s head with a velocity of thirty-four meters per second – more than enough to penetrate his skull… In terms of stopping power, that is equivalent to a fair sized modern handgun.”

So maybe David’s slingshot and stones were not at all inferior to Goliath’s weapons.  Maybe the point is that like David perfected his fighting skills by practicing day after day during the boring job of protecting the sheep, we need to hone our skills at spiritual warfare in the slog of everyday living. Be faithful in the little things. Make warfare prayer a way of life. Only then will we be prepared to fight God’s enemies when we face a giant.

Another reason David beat Goliath was because he didn’t conform to Goliath’s battle plan. David used different tactics. Goliath, with his sword and armor, needed close range, hand to hand fighting, so he called David to come to him. David refused. He launched his artillery from outside of Goliath’s reach. While the range of a spear was only as far as the arm could throw it, a sling was lethal at distances of over one hundred yards.  Goliath didn’t stand a chance. David used a missile against a rifle. He stayed out of Goliath’s reach.

I wonder if the lesson on tactics is for us is to stay out of Satan’s reach. Don’t fight by his rules. Don’t try to reason with the Father of Lies or you will lose. Like Adam and Eve lost. Don’t see how close you can get to temptation without sinning but keep as far away as you can. Flee from temptation.

Ok, let’s summarize these lessons. Since I am a preacher I’ll package them as Training, Tools, Tactics and Trust.

Training: Day after day back in the sheepfold, David did the hard work that prepared him to face Goliath. Because he was diligent in the farm field he was ready for the battlefield. He trained for battle by the way he lived out his daily responsibilities. In the end, Goliath was not nearly as dangerous as bears and lions.
Question: Are you constantly training in spiritual warfare, in everyday life, so you can fight for God’s honor and kingdom when the big crisis comes?

Tactics: Can you fight Satan while staying out of his reach? Are you usually on the offensive rather than the defensive? Do you fight spiritual warfare smart?

Lynn Anderson, in “Finding the Heart to Go On” (Nelson, 1991, p. 38-45) says, “Training and tools without trust equals pride. Naïve trust with our counting costs in terms of tools equals resumption. Training, tools, and tactics combined with trust results in contagious courage.”

So let’s not confuse fighting our personal giants with fighting His enemies, make promises He never does, or depend on him to show up with a miracle whenever life or ministry is tough. Let’s fight God’s enemies. Let’s fight for God’s honor. Let’s train hard. Let’s be skilled with our spiritual tools and wise with our tactics. Let’s trust that when we fight for the Lord, in the Lord’s name, depending on him, the victory will be his and the glory will be his. 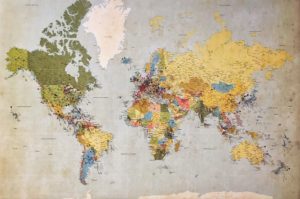 A Heart for Missions: Willing Servants and a Creative Community

Temple Hill Baptist Church in Cadillac, Michigan has been doing a Missions Garage Sale at the end of August for several years. The purpose of the annual garage sale is twofold: provide affordable items for

Before we hit the ground running in 2022, let’s take a look back at all that God has done in 2021 through Converge MidAmerica | Southeast | Caribbean! We are beyond thankful for the miraculous